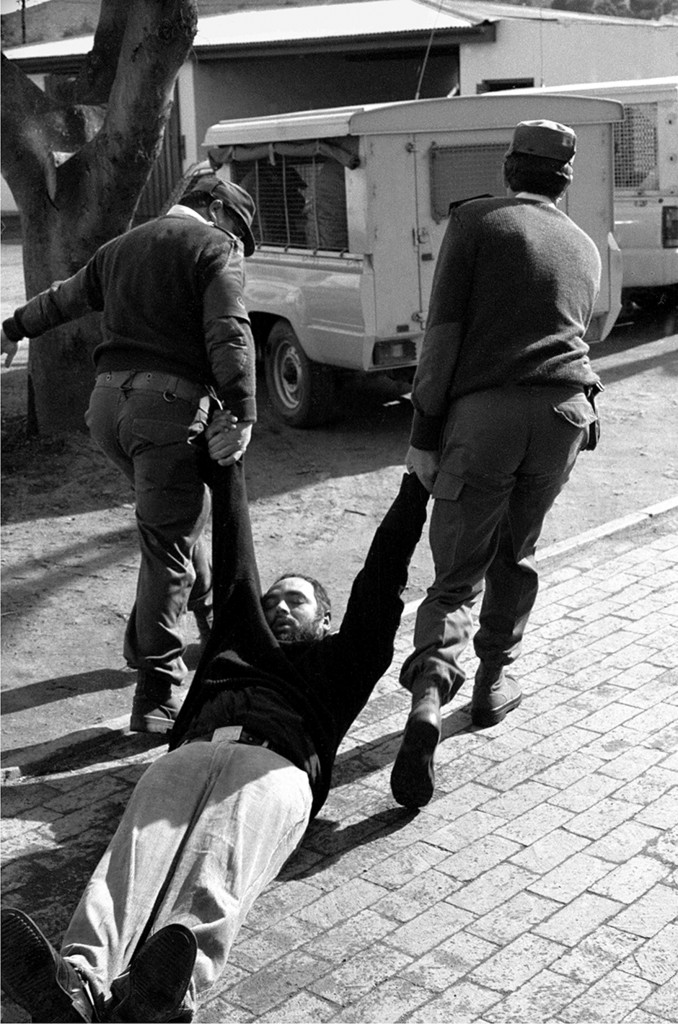 This photo was taken in Ashton in June 1990. I was the parish priest serving the Anglican congregations of St Josephs and St Paul in Ashton and St Mildred in nearby Montagu. The Ashton community had embarked on a mini-Defiance Campaign, insisting that the civic amenities such as the library and swimming pool be open to all the town’s inhabitants. There had been a sit-in in front of the Municipal Offices numbering about 100 people. A few tear-gas canisters had reduced our number to five people, all women other than myself. One of them was a high-school student. The police warned us that they would drop a teargas canister in our midst. One was shot our way but a young fellow, seeing it hit the ground and grabbed it on the first bounce with his gloved hands and tossed it into the nearby gold-fish pond. About five of the pool’s occupants popped to the surface, their little bellies reflecting the mid-morning sun. We were warned again. I told my comrades to hold onto each other. Our combined strength would carry us through this situation. I told them to close their eyes, breath lightly and focus on the dark. The promised canister was dropped in our midst. I must have passed out momentarily and found that I was the last one being dragged to the nearby police van. As if from far away I heard the one policeman say to his colleague: “Die vark is darem f*****n swaar!”. With me in the van was a Pentecostal sister who was cursing the cops with promises of hellfire and the certainty of God’s wrath. I pleaded with her to reserve her sermon until we were out of the van because I feared being tear-gassed while inside. To my relief she agreed.

I remember the quiet bravery of the town folk of those Boland towns, who embarked in their thousands on freedom marches across the region. Sometimes we were fortunate to have the presence of people like Rev Allan Boesak, Ray Alexander, Trevor Manuel, Oscar Mpheta, Cheryl Carolus and others to lead us on those occasions. But mostly we were on our own. People who had walked with great bravery in broad daylight were set upon at night and beaten by armed mobs of brandy-soaked farmers and their sons should they venture onto those lonely farm roads.

On a recent visit to Ashton I saw that some of the changes we desired were evident. The scrapping of the Group Areas Act meant that Coloureds and their fellow Africans lived in the same street, shared communal amenities… But there, as in all the cities of our land, we are living with the past, as the fundamentals of power were still in place. Poverty and the related immense social problems serve to remind us that while April 1994 secured us the right of freedom, its benefits will only be secured by a recommitment to and a resurgence of the struggle for the sharing of our land’s wealth with all the children of God.